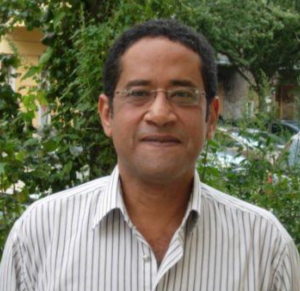 Leibniz-Zentrum Moderner Orient mourns the sudden death of Dr Ahmed Badawi (1967-2020). Ahmed Badawi was an Egyptian political scientist who worked at ZMO in 2011 und 2012 as  part of the SFB 640 Changing Representations of Social Order. Intercultural and Intertemporal Comparisons. Here, he was a researcher in the project A Far Enemy or a Partner for Peace and Development: Representations of Europe among Contemporary Egyptian Islamists. In 2011, he received his PhD in Political Science from Humboldt University on the evolution of democracy in the United States and the US-policy of democracy promotion abroad between 1981 and 2009.

Ahmed Badawi completed a MSc in Development Studies at the School of Oriental and African Studies in London in 2001 and subsequently joined the project Elite Change in the Arab World
at the German Institute for International and Security Affairs in Berlin headed by Dr Volker Perthes. At the Institute of Development and Peace at University of Duisburg-Essen he codirected the project Beyond Managing the Israeli-Palestinian Conflict: Towards a New Peopleto-People Agenda. In 2007 he became project head for Israel/Palestine with the Oxford Research Group. Subsequently, he was senior analyst in the Middle East and North Africa programme for the International Crisis Group in Jerusalem. Lately, he was a Research Fellow
at the Centre for Middle Eastern and North African Politics at the Free University of Berlin.

Since his studies in London, he became a highly critical – but always constructive – observer of international development. “Observer” though is not the right term: He engaged himself
tirelessly in order to impact on the uneven terms of exchange. In addition, he was never exhausted as a facilitator in the Israeli-Palestinian conflict. For years, he committed himself to
this cause. Together with Michaela Birk, Ahmed Badawi co-founded and co-directed the NGO Transform: Centre for Conflict Engagement and Political Development since 2007.

I got to know Ahmed in 1996 in Cairo, when he was working for the Institute of Cultural Affairs, Video Cairo and the Friedrich-Ebert-Foundation and invited me to give a lecture in the city of
Beni Suef. Ahmed Badawi was a next generation talent from the Arab world who closely followed the new social mobilization in Egypt and beyond. He was one of those much-needed
voices whose knowledge mediated – workwise and in private – between the German public and events in Egypt. People-to-people – this is what Ahmed Badawi aspired to, worked and
lived for vigorously. He was a very caring, devoted and cheerful person. And from England he brought the habit of using black cigarette paper with liquorice taste.

For many years he suffered from a kidney failure and had to go to dialysis three times a week. He learned howto travel with the illness discovering a new world of solidarity and live a normal
life with dialyses. But he also waited for the donation of a kidney for many years. Ten years  ago, we discussed whether he should put himself on the waiting list. Anyone who knew Ahmed, knew that he was always ready to go into uncharted territory.

Ahmed Badawi died in Berlin at Charité hospital on 18 March 2020. It is an unexpected, untimely death that leaves a huge circle of friends and collaborators (who became friends as
well) in many countries speechless and in pain. They have set up a website in his name:

Our thoughts are with his partner Colinda Lindermann, his long-time companion Michaela
Birk, and his always supportive mother Mona Zayadi in Cairo.
Sonja Hegasy, 24. März 2020

Manage Cookie Consent
To provide the best experiences, we use technologies like cookies to store and/or access device information. Consenting to these technologies will allow us to process data such as browsing behaviour or unique IDs on this site. Not consenting or withdrawing consent, may adversely affect certain features and functions.
Manage options Manage services Manage vendors Read more about these purposes
View preferences
{title} {title} {title}